Use the video and step-by-step drawing instructions below to learn how to draw the Joker from Batman: The Animated Series. A new cartoon drawing tutorial is uploaded every week, so stay tooned!

Intro: Start drawing the Joker with a pencil sketch. In the beginning stages, don't press down too hard. Use light, smooth strokes for sketching. Step 1: To draw the Joker from Batman: The Animated Series, start with an oval in the middle of the page. You don't have to draw the oval perfectly. This is just a guide for the Joker's head. Step 2: Next, draw a vertical line near the right side of the oval and a horizontal line near the top. Draw the lines so they curve and contour to the shape of the oval. These are construction lines that will help you place the Joker's features later on. Step 5: Draw a curved line right below the Joker's nose making sure it extends to the right of his face but doesn't overlap his nose. Draw another similar-looking curve below the first. This will form Joker's mouth. The end result should look like a crescent moon on its side. Step 6: That's it for the initial sketch of the Joker from Batman: The Animated Series! You have the basic Joker shape, so now go in and tighten your drawing. From this point on, press harder with your pencil in order to get darker lines and a more defined sketch. Step 7: Start by giving the Joker's nose a more curved shape. On the left side of the nose, draw a curved line and a small shaded shape for his nostril. Step 8: Using the initial shapes as guides, draw the Joker's eyes. The line above his eyes connect, and the outline below each eye is thicker and darker. Inside the Joker's eyes, draw a couple of half circles and shade them in to represent his pupils. Step 9: To make it easier to draw, there are two steps for how to draw the Joker's famous smile. First, use the initial guide line to shape the smile properly. Draw the smile so it comes inward a bit on the right side and add thicker lines on the top and bottom for his lips. Step 10: Finish the Joker's smile by drawing his teeth as a curved horizontal line and three vertical lines that resemble a grid. On the ends of the Joker's smile, draw a couple of curves to indicate his smile lines. 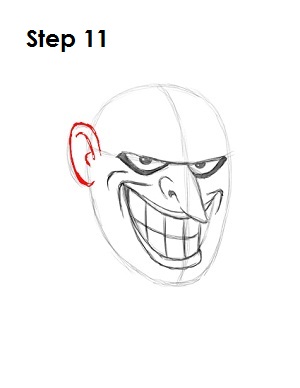 Step 11: Render the Joker's ear by darkening it and drawing a few extra curved lines within it to represent the inner structure. Step 13: Now draw the top of the Joker's hair, which starts on top of his ear then moves up to create two spikes. Then draw the hair line so it curves to the right and meets the line you previously drew to form another spike. Inside draw two lines that follow his hair shape to represent the sheen. Step 14: Use the oval as a guide to finish drawing the shape of the Joker's face. Make his chin longer and pointier and draw a curved line below the Joker's mouth. Step 15: That's it! You now have a nice sketch of the Joker from Batman: The Animated Series. You can stop at this quick drawing for a rough, sketchy look or go for a more finished look by continuing to the step below. Step 16: For a more finished, inked look, carefully draw over the final sketch lines with a pen or marker. Wait for the ink to dry, and then get rid of every pencil mark with an eraser. You now have a finished inked drawing of the Joker! You can stop here or go to the final step to complete your Joker drawing. Final Step: For a completely finished Joker drawing, you have to color it. You can use markers, color pencils or even crayons! Color the Joker's hair black and the sheen portion green. His eyes and teeth are yellow, and his lips are red. That's it! You now have a completed drawing of Batman's enemy: the Joker.