How to Draw Bonnie (Five Nights at Freddy's) 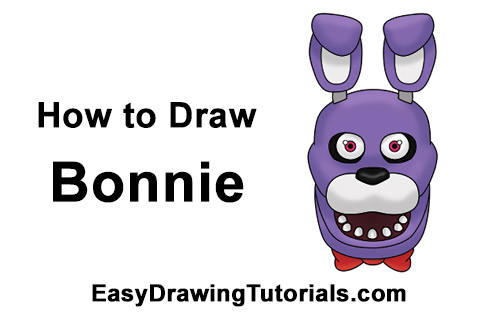 Use the video and step-by-step drawing instructions below to learn how to draw Bonnie from the Five Nights at Freddy's games. A new cartoon drawing tutorial is uploaded every week, so stay tooned! Step 1: Start by drawing a big circle as a guide for the top half of Bonnie's head. The circle doesn't have to be perfect. It's just a guide. Leave room at the top for his ears and at the bottom for his jaw. Step 2: Under the head, draw a big U-shaped line as a guide for Bonnie's lower jaw. The line should be wide and a bit flat at the bottom. Step 3: Next, draw two intersecting lines across Bonnie's entire head, one vertical and one horizontal. These will be construction lines that will help you place the facial features later on. The vertical line should be straight and in the middle of the head. The horizontal line should curve more and be closer to the middle of the original circle. Step 5: On top of the head, draw two long curved lines as guides for Bonnie's ears. The shapes of the lines should be similar to an upside-down letter U.