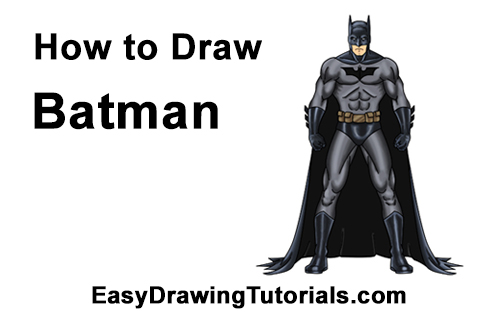 Use the videos and step-by-step drawing instructions below to learn how to draw Batman (Full Body). A new cartoon drawing tutorial is uploaded every week, so stay tooned! Step 1: Draw a small circle near the top of the page as a guide for Batman's head. First draw four tiny marks for the height and width of the circle, then connect the marks using curved lines. Sketch lightly at first so that it's easy to erase if you make a mistake. But the circle doesn't have to be perfect. It's just a guide. If you do want a perfect circle, trace the outer rim of a coin, bottle cap or anything else that's circular. Draw a small U- shaped arc under the head as a guide for the jaw and chin. Don't draw the arc too low, otherwise Mr. Bruce Wayne will end up with a big chin. Step 2: Draw a vertical line across the entire head. This construction line will help you place Batman's facial features later. Add two tiny lines under the head as guides for the neck. Step 3: Draw a big oval under the head as a guide for Batman's chest. Pay close attention to the size of the chest in relation to the head. Sketch it lightly at first to get it right. Batman is muscular, but he isn't as big as other huge characters, like the Hulk, so don't draw the oval too big. Step 41: Uner the oval, draw a square- like shape as a guide for the middle section of Batman's torso. First draw two vertical lines on the sides, then close the shape at the bottom with a horizontal line.