How to Draw Namine

Use the video and step-by-step drawing instructions below to learn how to draw Namine from the Kingdom Hearts video games. A new cartoon drawing tutorial is uploaded every week, so stay tooned!

Intro: Start drawing Kingdom Hearts' Namine with a pencil sketch. In the beginning stages, don't press down too hard. Use light, smooth strokes for sketching. Step 1: To draw Namine, start with an egg shape in the middle of the page. You don't have to draw the egg shape perfectly; it's just a guide for Namine's head. Step 2: Underneath the egg shape, draw two wavy lines that extend outward toward the sides and then curve down toward the bottom. These lines make Namine's neck and shoulders. Step 4: Now draw the basic shapes for Namine's eyes, which are two small ovals with pointed ends, like footballs. Draw these ovals so they sit on top of the horizontal construction line on either side of the vertical construction line. Step 5: Draw some guides for Namine's hair. Draw a line that starts at the top of her head and then moves left around her head and a bit below the left shoulder. Draw another line on the opposite side that ends right on top of the right shoulder. 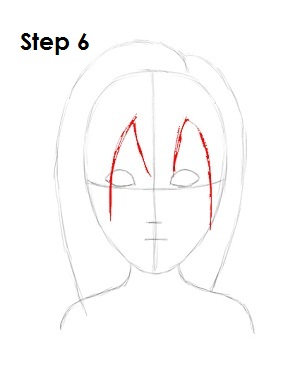 Step 6: To draw the guides for Namine's bangs, draw an upside-down V shape above each eye. The lines that are closest to the sides of Namine's head are longer. Step 7: That's it for the initial sketch of Namine from the Kingdom Hearts video games! You have the basic Namine shape, so now go in and tighten your drawing. From this point on, press harder with your pencil in order to get darker lines and a more defined sketch. 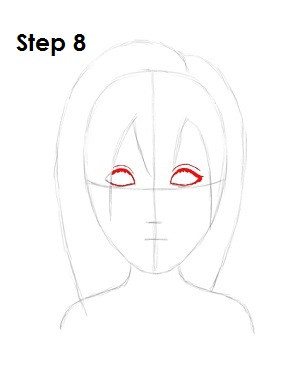 Step 8: Tighten the shape of Namine's eyes by making them darker. Draw eyelashes for detail and a curved line above each eye for Namine's eyelids. 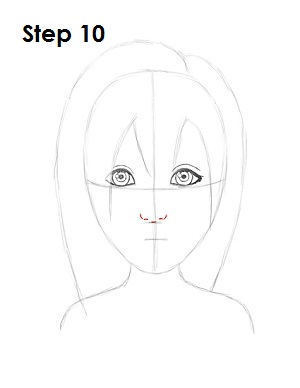 Step 10: Above the smaller of the horizontal construction lines, draw Namine's nose. Draw a few small curved lines, two vertical on the sides and one horizontal in the middle for basic structure. Then draw a couple more horizontal curves at the bottom for Namine's nostrils. Step 11: Draw Namine's mouth on top of the bottom horizontal construction line as a long curved line. Below and above that line, draw a small curved line to represent Namine's lips. Step 12: Namine's hair is quite complex, so this section about how to draw Namine's hair is divided into three parts. Darken the outer part of her hair and make it drape over the shoulder on the left side. Draw a few jagged lines at the bottom for where Namine's hair ends. Step 13: Draw detail on Namine's bangs using the initial upside-down V shapes as guides. Make the hair on the left side drape over her eye and draw small jagged line across the bottom for the hair's ends. Step 14: Finish up Namine's hair by drawing lines all over it for detail. Don't overdo these lines; you're not drawing every single strand of her hair but just giving it structure. Step 15: Above each of Namine's eyes, draw a thick curved line for her eyebrows. You can't really see them because they're hiding behind her hair. At this point, darken in the bottom portion of Namine's face, as well. Step 16: Darken in Namine's neck and shoulders except for the parts that are hidden behind her hair. Draw the straps of her dress on the sides. Below Namine's neck, draw two lines for her collarbone. Step 17: That's it! You now have a nice sketch of Namine from the Kingdom Hearts video games. You can stop at this quick drawing for a rough, sketchy look or go for a more finished look by continuing to the step below. Step 18: For a more finished, inked look, carefully raw over the final sketch lines with a pen or marker. Wait for the ink to dry, and then get rid of every pencil mark with an eraser. You now have a finished inked drawing of Namine from Kingdom Hearts! You can stop here or go to the final step to complete your Namine drawing. Final Step: For a completely finished Namine drawing, you have to color it. You can use markers, color pencils or even crayons! Color Namine's hair and eyebrows a light brown or yellow and her eyes blue. Her skin is a peach color, but if you don't have peach, improvise and use yellow-orange or light brown. Experiment! Give Namine's lips a bit of pink and leave the straps of her dress white. That's it! You now have a completed drawing of Namine from the Kingdom Hearts video games.