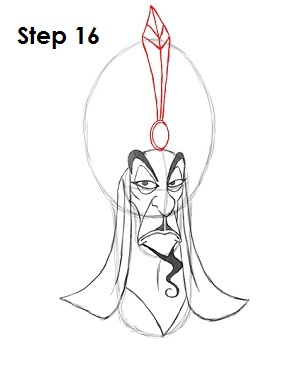 Step 16: Now draw the turban on Jafar's head. Start with an oval on top of his forehead to represent the jewel he has. Draw a line on the left that surrounds the jewel. To draw Jafar's feather, simply draw a long diamond shape above the jewel, a line that intersects it and a few smaller lines near the top. Step 17: Using the shape of Jafar's turban as a guide, darken in the shape of his turban and draw it so it bulges a little on the sides. Draw two curved lines on either side of his jewel to finish up his turban. Step 18: That's it! You now have a nice sketch of Jafar. You can stop at this quick drawing for a rough, sketchy look or go for a more finished look by continuing to the step below. Step 19: For a more finished, inked look, carefully draw over the final sketch lines with a pen or marker. Wait for the ink to dry, and then get rid of every pencil mark with an eraser. You now have a finished inked drawing of Jafar! You can stop here or go to the final step to complete your Jafar drawing. Final Step: For a completely finished Jafar drawing, you have to color it. You can use markers, color pencils or even crayons! Color the top of Jafar's turban black. The curved lines on Jafar's turban is yellow along with the piece surrounding the jewel. The jewel itself is red, but leave a portion of it uncolored to represent glare. Jafar's feather is also red. The cloth coming down on the sides of the turban are a darker red. The neck part of Jafar's outfit is cream, but you can use light brown if you don't have cream. Jafar's eyelids and bags under his eyes are a light violet. His face is peach, but if you don't have peach, improvise again and use light orange or pink, anything that works. That's it! You now have a completed drawing of Jafar, the villain from Disney's Aladdin.